There aren’t many places which showcase so perfectly the multi-layered mix of cultures which we call Greek civilization, like Monastiraki square. It is situated north of Plaka, the traditional neighborhood under the Acropolis, and right next to the busy junction of two central streets, Ermou and Athinas.

Standing in the middle of the square and looking around, you immediately perceive the diversity of the buildings which are visible. On one side you have the Ottoman-era mosque of Tzistarakis and on the other, the orthodox church of the “Dormition of the Virgin Mary of Athens”. The pillars of Hadrian’s Library, built in the 2nd century A.D., can be seen through and next to the arches of the Mosque, while – directly above them – the imposing Acropolis dominates the backdrop. Several neoclassical buildings which surround the square or line Athinas street, including the Metro Station, add yet another era to the list of the ones already represented in this limited space. In other words, you are standing in the middle of a miniature architectural representation of the melting pot of cultures that have passed from this land, which stands on the crossroads of three continents. 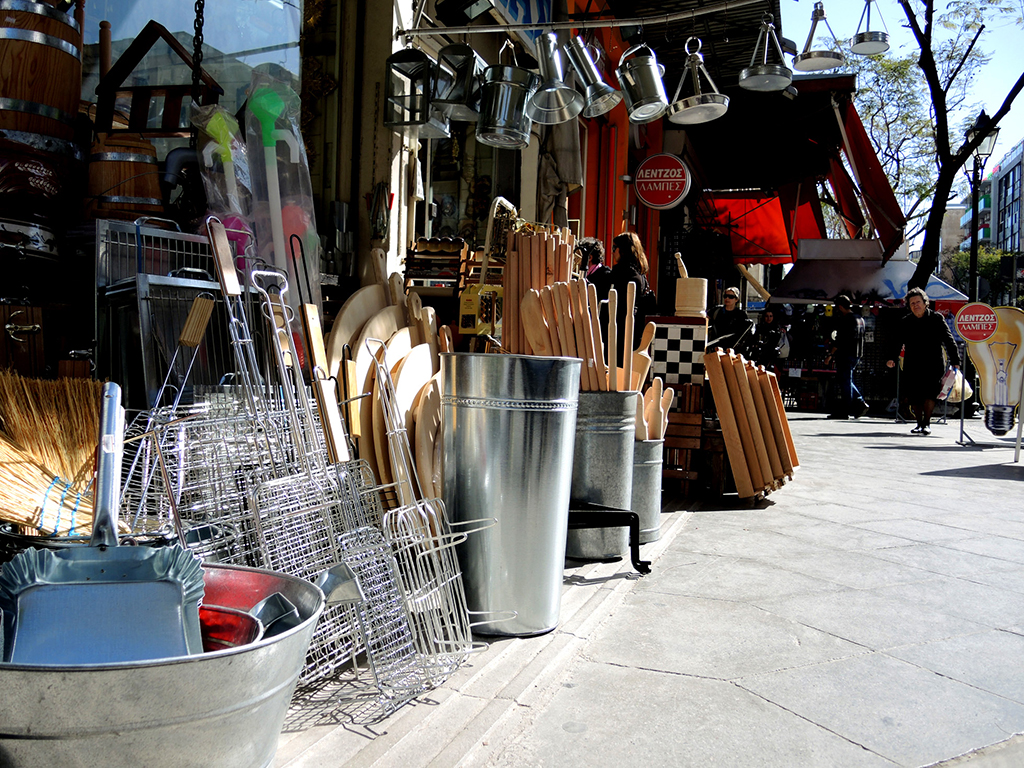 Where does Monastiraki name comes from?

The name ‘Monastiraki’, which means ‘small monastery’, refers to the orthodox monastery that occupied the square during the Ottoman times. The only remnant today is the church mentioned above and, of course, the tell-tale name of the neighborhood. The addition of the Mosque in the 18th century fueled the economic growth of the surrounding area, making the Monastiraki market a stable feature of the area up until today. 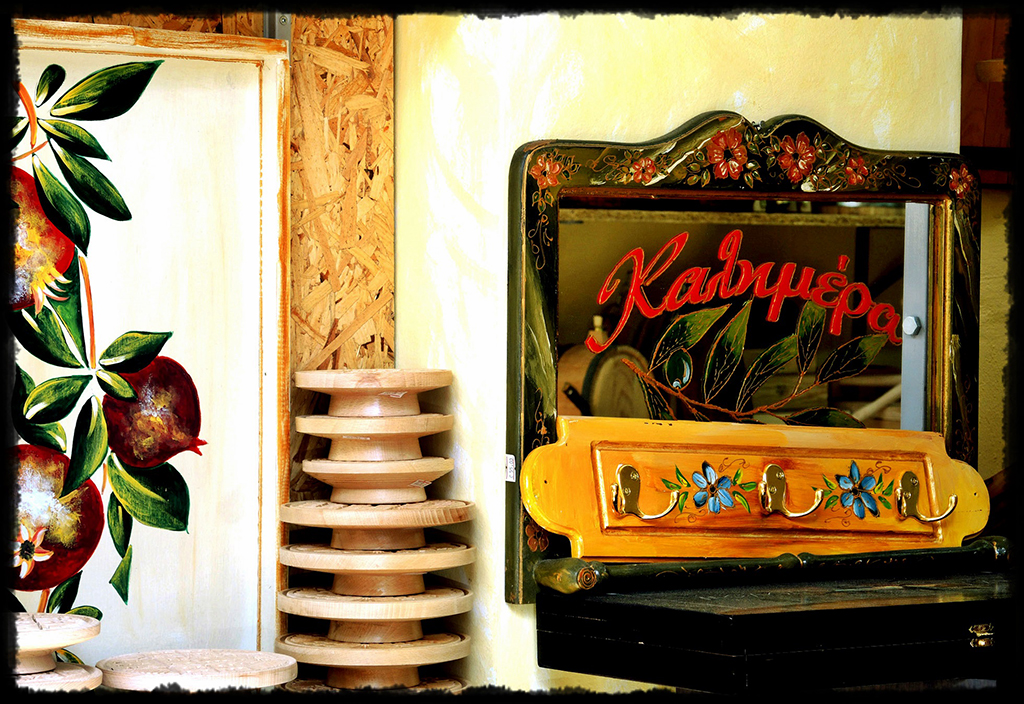 Despite the imposing historic buildings, the modern city still manages to shout its presence through the noise that comes from the busy shops and the people who crowd the square on a daily basis. Here you can find souvlaki places and Greek taverns, traditional “kafeneio” and modern cafés, Chinese-made souvenirs next to genuine Greek art pieces and shops that sell both real antiques of all kinds, as well as cheap imitations or even cheesy, fake ancient Greek hoplite helmets. Peddlers of various foods and snacks compete for premium spots and fill the air with smells of roasted chestnuts or fresh, pungent fruit, depending on the season. On one corner you might find youngsters beat-boxing and break-dancing, while on another, the sound of bouzouki from a tavern’s resident band tempts passers-by to start dancing the Zorba. Every other day a different street-performance act takes place and countless roaming buskers pass from here, covering all styles of music, from folk to jazz. 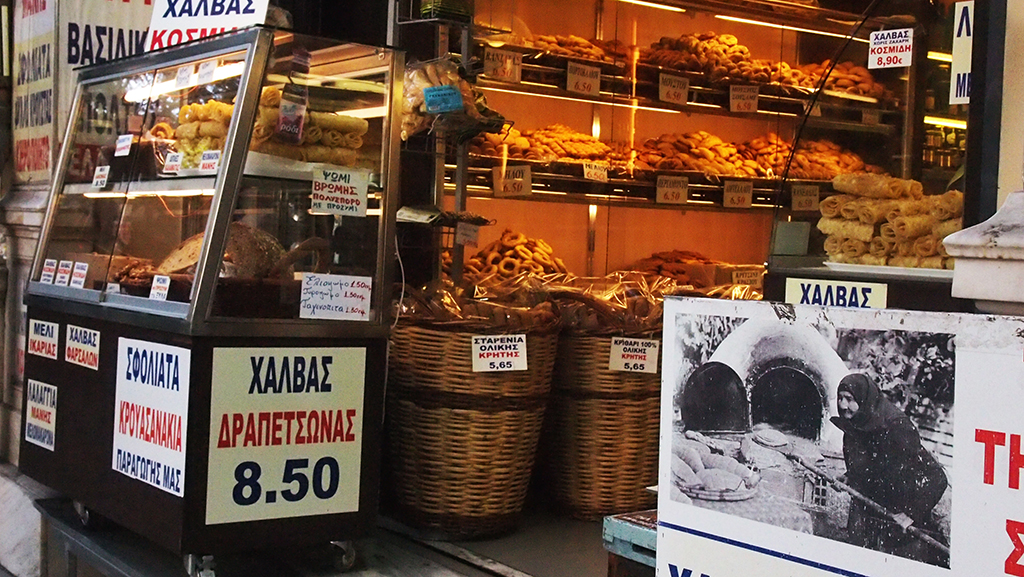 Another characteristic feature of Monastiraki is the antiques- and flea- market which operates in the streets around and including Ermou and Ifestou and on Abyssinia square. Ages-old army surplus stores filled with all kinds of second-hand equipment, along with relics like old swords and broken guns, Nazi helmets and old war-medals of various kinds have been waiting here for as long I can remember. 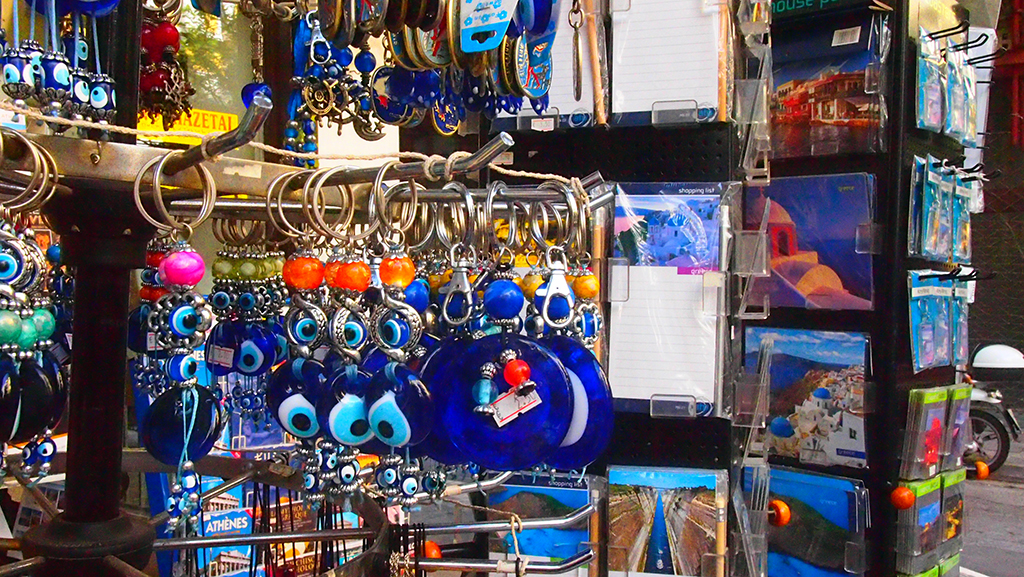 The range of things which can be sold or bought here is impressively wide; old books and magazines, vinyl records and cd’s, furniture, hand-made musical instruments of all kinds, leather bags or sandals, trendy clothing, souvenirs, collectibles and many more things you don’t really need – but possibly want to own – can keep you browsing for hours. Just don’t buy that “This is Sparta!” t-shirt, because you know my friend, this is not Sparta. To be accurate this is the exact opposite of Sparta… this is Athens! 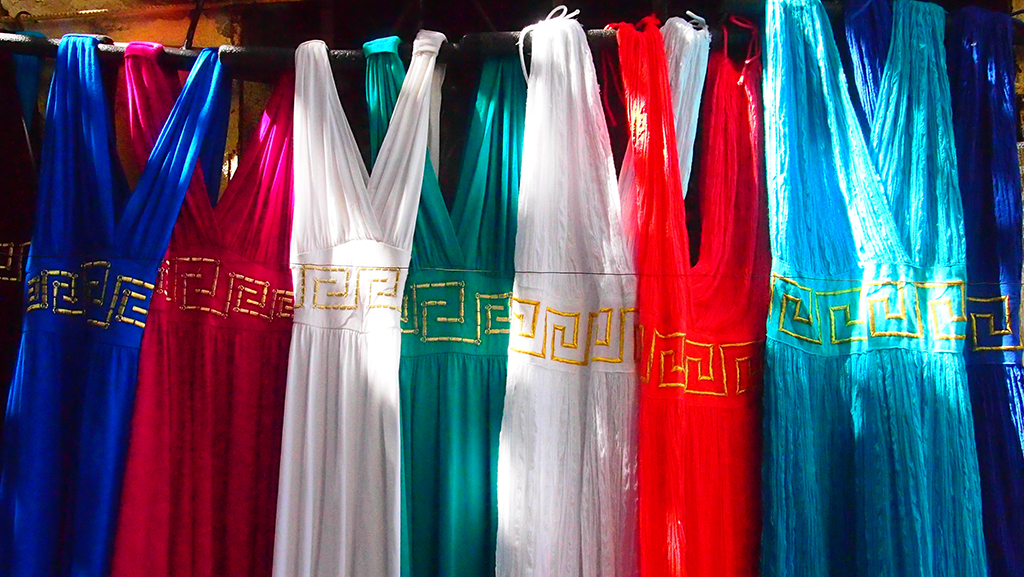 All in all, Monastiraki is one of few places in Athens that manages to convey this eternal city’s complex and multi-faceted character, as it encompasses social, gastronomic and historic elements in a generous bouquet that extends chronologically back to the ancient times.