What is the Greek Souvlaki

It could be called the «Burrito of the East», «Hot Dog of the Mediterranean» or “Amvrosia to Go”… but we simply call it “Souvlaki”.

And the only way you can miss the famous - and equally delicious - street food during a visit to Greece, is by spending your whole visit here in jail or something. Although, there are rumors that many prisoners do bribe the right people to have their “souvlaki” order delivered in their cells.

Anyway, for the not-so-lucky in life that haven’t tasted “souvlaki” yet, let’s begin by explaining that there is no single recipe for it; we are talking about a street food which comes in so many different versions, that simply ordering one can become a confusing experience for the uninitiated who do not know the perks and secrets of the ‘Holy Grail’ of Greek street food. So read on, we are going to give them away.

First of all, the word “souvlaki” itself, can be used to describe at least three different things, depending on where you are when ordering, while each version can have further variations, as well.

In a restaurant, you should expect a main course dish with fries and all the trimmings on the side of the main item, which is pieces of (usually) pork meat, char-grilled on a metal skewer. Although it tastes good, do not pay it too much mind, it’s just a posh thing.

Anywhere else –well almost…- “souvlaki” is a generic term which means pieces of pork meat skewered with a small wooden stick, char-grilled and spiced up with salt, pepper, oregano, etc., usually accompanied by a small slice of toasted bread.

Of course, in any part of Greece you should order this as a “kalamaki” to distinguish it from the full-version “souvlaki” that will be described below. The word “kalamaki” means “small piece of cane/bamboo/reed” and it refers to the cheap and disposable wooden stick that serves as a skewer. But in Thessaloniki and the northern territories it is held that this should be called “souvlaki” –meaning little “souvla” (“skewer” or “spit” deriving from the Latin word “subula”), and if you order a “kalamaki” you will be mocked as you will have, inadvertently, asked for something to sip your coffee or refreshment with. This is due to the fact that the word “kalamaki” is also used all over Greece for “sipping straw”.  In any case, as a tourist you ‘ll be fine, they will play along, just don’t bring up the subject in a company comprising guys from both Athens and Thessaloniki cause you might end up with a miniature Greek civil war in your hands. 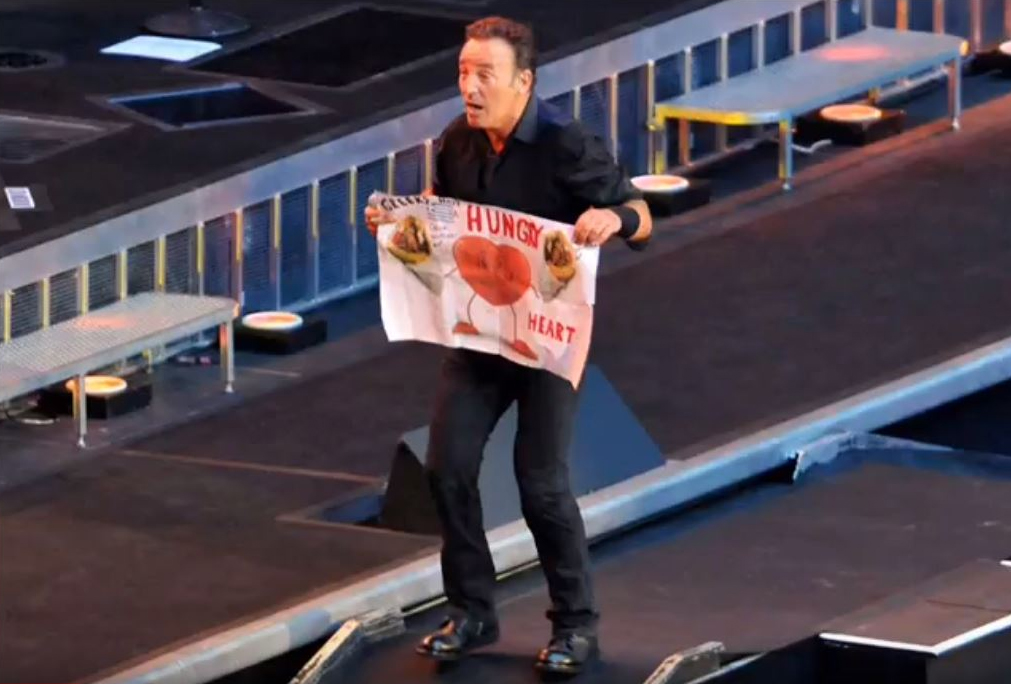 Souvlaki memories were used from Greeks on Bruce Springsteen to make him play "Hungry Heart" in Wembley Arena in 2016. It worked!

Now let’s get to the real McCoy of Mediterranean street culture and what most of the Greeks call (drums please)… SOUVLAKI!

A ballet of tomato and sliced onion, dressed in tzatziki sauce, with a few vagabond french fries, under a rain of salt, red pepper, parsley and oregano, trying to steal the show from the leading star, that can, traditionally, be one of three things: the “souvlaki” , which was described above –wooden stick removed-  lamp kebab, or “gyros” which is small thin slices of pork meat that are shredded off a large chunk which slowly roasts on a vertical (gyrating) spit.

Still, none of the above can be called “souvlaki” before the “final act”, which involves wrapping up everything in the “pita”, a small, round, fluffy flatbread, usually basted with oil before it gets semi-crisped on a hot plateau. After the ingredients we mentioned get spread on the pita, an extra portion of salt and red pepper is added, and the whole thing gets squeezed together as the “tylichtis” or “wrapper” closes the pita with a super-fast swirling move in paper and some napkins to go.

The variations of “souvlaki” are numerous: There is one with “chicken souvlaki”, fries, lettuce and mayo-and-ketchup based sauce, while another version features chicken pieces wrapped in bacon; a Cypriot version with “sheftalia” (minced pork meat with spices cooked in lace fat – similar to the English “faggot”) on the leading role with thin sliced cabbage and pickled cucumber; a rare version with “frygadeli” (lamp intestines wrapped in lace fat and roasted); the savage “britzolokalamo” version with a miniature pork steak in the center; …hell  I ‘ve even eaten a version with thick farmer’s sausage, mustard and extra garlic! It totally rocked but instead of butterflies I felt small dinosaurs in my stomach for a while… I had to drive them to extinction with beer, souvlaki’s best friend.

The easy part is finding out what you like. You can find souvlaki on every other corner in every city and it’s the cheapest and most yummy thing you can have on the go. Keep trying around until you locate your personal favorite. Remember that as it is always prepared upon ordering it, you can ask for ingredients to be added or left out. Yes, even the meat, in case you are vegetarian. Just remember that once wrapped, they all look the same so it is considered prudent to always double-check which one contains what. Oh, don’t be shy to bite in the whole thing like a shark - that’s half the joy - but have some extra napkins handy, for the leaks…