Stavros Niarchos Cultural Centre: (not) just another Day by the Seaside

Got a sunny day in Athens, but you are already fed-up with “ancient” stuff? We got you covered with a modern, state-of-the-art architectural jewel built on top of a park.

Situated right next to the city’s waterfront, the brand-new, spectacular Stavros Niarchos Cultural Centre is not to be missed by anybody who has more than a few days to spend in Athens; a space ideal for all outdoor activities like walking, jogging, enjoying a picnic, relaxing among plants and trees, it also regularly hosts concerts, exhibitions and other events - usually with free admission – in the vast gardens which surround the main building.

Not that it is easy to miss… It is right there, on your right hand, next to the city’s main “Syngrou” avenue, which goes downhill all the way from the center of Athens to the sea at Faliro bay.

Designed by the famous Italian architect Renzo Piano and funded by the Stavros Niarchos (one of the most famous Greek shipping tycoons) Foundation, the cultural center is a pretty big –for the city’s standards- landscaped park of a total 170,000 square meters with its own building complex.

A recent - completed in 2016 – and very bold attempt of the city to reestablish its relation with its most dominant natural element, the sea. When Renzo Piano first talked with the local authorities on the project, he had one burning question: “the municipality where the designated building spot was is called ‘Kallithea’, which means ‘nice view’ (seaview). Where is it?” Well, it took great effort and money to turn a huge, dirty, deserted area to the city’s grandest project, but the view is back and it is spectacular.

The buildings by themselves are magnificent. But it’s the perfect marriage between them and their surroundings that creates such a unique sensation, as they all sit on an artificial hill that was created at the south (the sea-side) end of the site. This man-made hill restored the view to the seafront which the previous facilities on the shore -among them the city’s abandoned horserace track - were blocking from the wider area. Now, filled with small trees and pleasantly smelling herbs and bushes, the long artificial slope climaxes slowly from road level, at the north, to the cultural center building, at the south, giving it majestic views towards the sea, and at the same time the serene sense that its topmost building is ready to slowly take off over the water.

On its left side lies the “Esplanade”, an artificial water canal with terraced, elevated pedestrian walkway next to it. These constitute both the site’s visual connection with water and the physical connection to the seafront, leaping over car traffic.

Hint: if the walk inside the cultural center’s park is not enough for you, you can follow the Esplanade to the waterfront and then keep going towards the east. Two kilometers away is the vibrant Flisvos Marina, with cafes and restaurants and the Naval War Museum. There, the historic WWI-era battleship “Averof” is permanently anchored and usually open to the public. And close by, on dry land and under a big shed, sits “Olympias”, the only actual-size and fully functional trireme in the world, built in 1987, as an exact replica of the Greek ancient triremes. 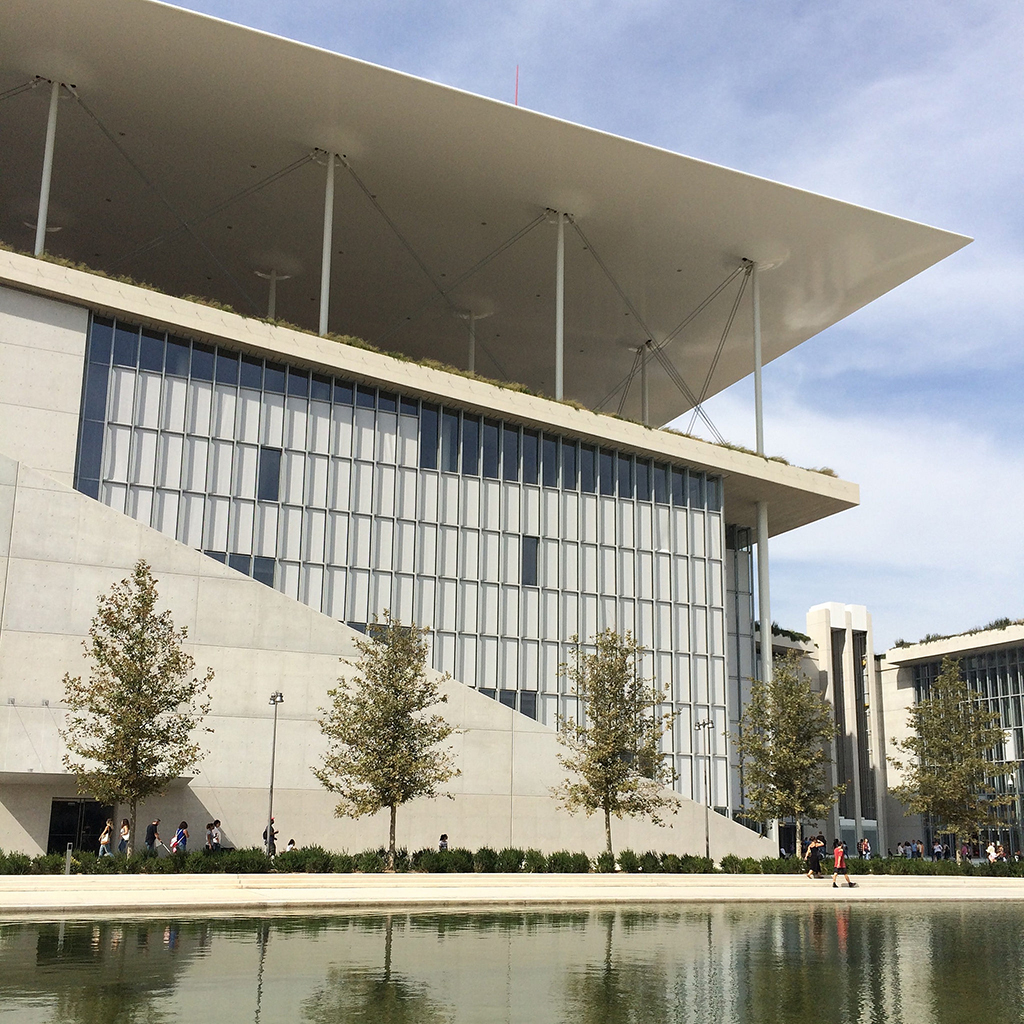 Back to Stavros Niarchos Center now; the area’s -if not the whole southern city’s crown jewel- is its building complex. It is imposing on the park’s south side like a giant futuristically designed beach tower or observatory over the sea. In this state of the art cultural and educational facility will eventually National Library of Greece and the Greek National Opera be transferred, when the “project” be completed and delivered to the state.

Both the opera and the library are combined in one building, with a public space, known as the “Agora”, providing access and connections between the two main facilities. The opera wing is composed of two auditoriums, one (450 seats) dedicated to traditional operas and ballets and a second one (1.400 seats) for more experimental performances.

The entirely made of glass-walls library reading room, is on the top of the building, right under the canopy roof. A square horizontal transparent box, offering a 360-degrees views of Athens and the sea. 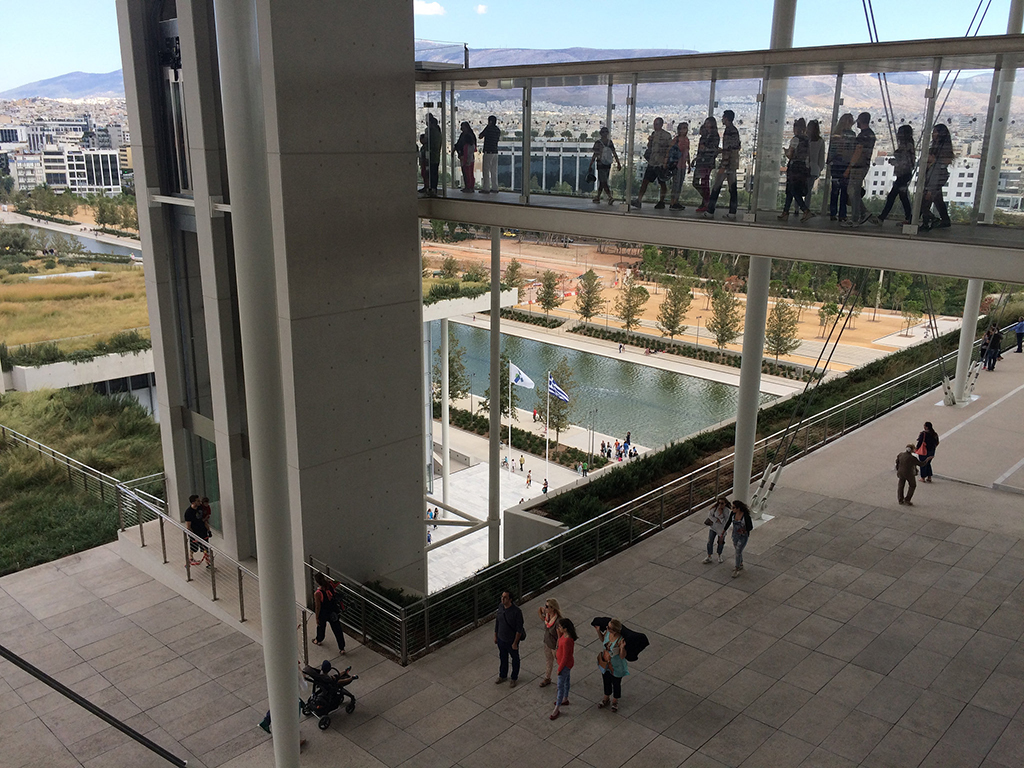 The canopy roof provides the much needed shade and has been topped with 10.000 sq m of photovoltaic cells, enough to generate 1.5 megawatt of power for the library and opera house. This field of cells allows the building to be self-sufficient in energy terms during normal opening hours. Wherever possible, natural ventilation has been used, as the complete facility is also an exercise on self-sustainability.

Various happenings are scheduled from time to time so get online and see what’s coming before you program a visit.