Athenian Trilogy: National Library, University of Athens & Academy - Take a walk on the …Neoclassical Side

You are walking through one of the most hectic and intense traffic junctions of the city and suddenly two ancient Greek gods fly over your horizon! Relax; it’s neither the heat of the sun, nor the power of ouzo that hit you.

The two statues - of Athena and Apollo - are guarding a 3- building complex called the “Athenian Trilogy”, the epitome of neoclassical architecture in Greece.

In the middle of the city, positioned like an island of supreme standard, excellent taste and classical aesthetics, the Library, the University, and the Academy, stand between two rivers of jammed cars and hurrying pedestrians on Eleftheriou Venizelou (or Panepistimiou, as the locals call it, after its old name) Avenue.

Normally, and if you haven’t done your ‘homework’, you might be confused. These buildings look as “ancient Greek” in style as they come, but are very well preserved to be standing in the middle of heavy traffic, for the 2500 years that separate us from the ancient Greek classical era.

And you are right. The three neoclassical buildings were built from 1864 to around 1890. Soon after the first, small part of Greece got liberated from the Ottoman Empire, Athens was chosen as its capital.  The newly-enthroned king Otto –of Bavarian origin- found out that apart from its name, few obvious things connected the place to the birthplace of all western civilization. Athens was a medium-sized village with as many ancient ruins as …sheep grazing among them. So he decided that the place needed some big buildings to accommodate its future intellectual development and at the same time remind everyone, that they are walking on the same grounds where the western world’s first and greatest philosophers and scientists walked too.

Luckily, he didn’t adopt any Las Vegas-concept building ideas to recreate a brand new Acropolis or other ancient Greek temple. Instead of a kitsch reproduction of the past, he called one of Europe’s star architects of the mid -nineteenth century, Danish architect Christian Hansen, a maître of neoclassical aesthetics and admirer of the Greek classical era.

He, along with his brother Theophil Hansen and later his student Ernst Ziller, gave the 3-building complex a unique neoclassical form and his attention to detail is evident everywhere, from the ancient Greek styled marble columns, to the sphinxes on the metal guard rails. 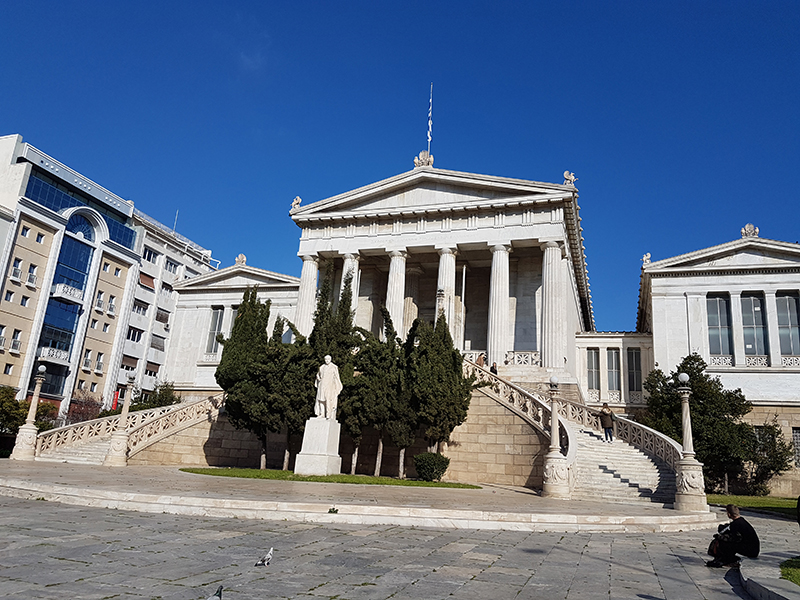 The task was of enormous size and scale, so they summoned artists from all over Europe and the project was initially financed by the king himself. But later, many wealthy Greek merchants and businessmen from around the world contributed to it and filled it with magnificent pieces of art like murals - one of them 50 meters long -  and statues, which most people see …in TV newscasts as it’s in these great halls that the Greek state receives honored guests.

Apart from its beauty, the Trilogy’s attribute of being not only a monumental piece of architecture, but a “living” part of the cement-buildings-filled city, is admirable.

The National Library of Greece holds some 2,000,000 volumes of books and periodicals and over 4,500 manuscripts. Among them, the first-ever edition of a printed book in Greek from 1476.

The University building houses some administrative services, and offers its majestic halls for ceremonial events.

And the - inspired by the Propylaea of the Acropolis - Academy, along with its statue-decorated pediment, is since 1903 dedicated to the preservation of Hellenic intellectual heritage.