An off-the-beaten-path Excursion from Parnassos to Galaxidi

Go on an excursion to the place where the two eagles met when, according to mythology, Zeus let them fly from the two ends of the Earth to locate the center of the world. Arrive at today's Delphi.

Turning for Distomo, we follow a lesser-known route. First stop for a nut from Samuel's bakery in Desfina, a non-touristy but authentically welcoming village. Especially in early spring, it is wonderful to cross its plateau, full of olive and almond trees. The short first stop just for bread unexpectedly evolves into a table full of local flavors: olives, Desfinio feta cheese, a special, delicious bread called "patalia", which is served with petimezi, halva, and homemade strong wine! Our tour of ancient routes begins with a light morning wine, bright smiles, and local flavors.

The route that follows has several turns, but it is certainly one of the most beautiful approaches to the Gulf of Corinth. In the background, the snow-capped peaks of Parnassos and Giona, the sea to the left, and the Peloponnese opposite.

Ancient Kirra, once the port of Delphi, has now expanded to the site of a huge willow tree, which gave its name to the new town of 1830. Itea has many cafes, bars, and restaurants, piers, and promenades lined with lemon and orange groves for fishing, but also long beaches, in contrast to the small coves of Galaxidi. This last, the "island on land", until 1963 could only be reached by boat from Itea, as there was no road. But now it exists and in just ten minutes we are in the historic harbors and the incredible quiet of ancient Halios. We learn about its glorious history in its small but remarkable museum, the first naval museum in Greece since 1928.

Moving on, coins from the 4th century allow us to talk about trade, carnations, and short-barreled naval rifles about its place in wars, paintings, and capes about its seamanship before we come to the most important collection of stamps, which they acquired in 2006. Sea flavors side by side in the boats, a walk with Parnassos and the Delphic slope always in the background. Simplicity, nobility, and intimacy. Renovated captain's houses and wildflowers in Stella Senduka's vases, among them small wild orchids, such as Ophrys Spruneri. Arriving at the church of Agios Nikolaos with its amazing wood-carved iconostasis, we are greeted by pure beams of light piercing through. 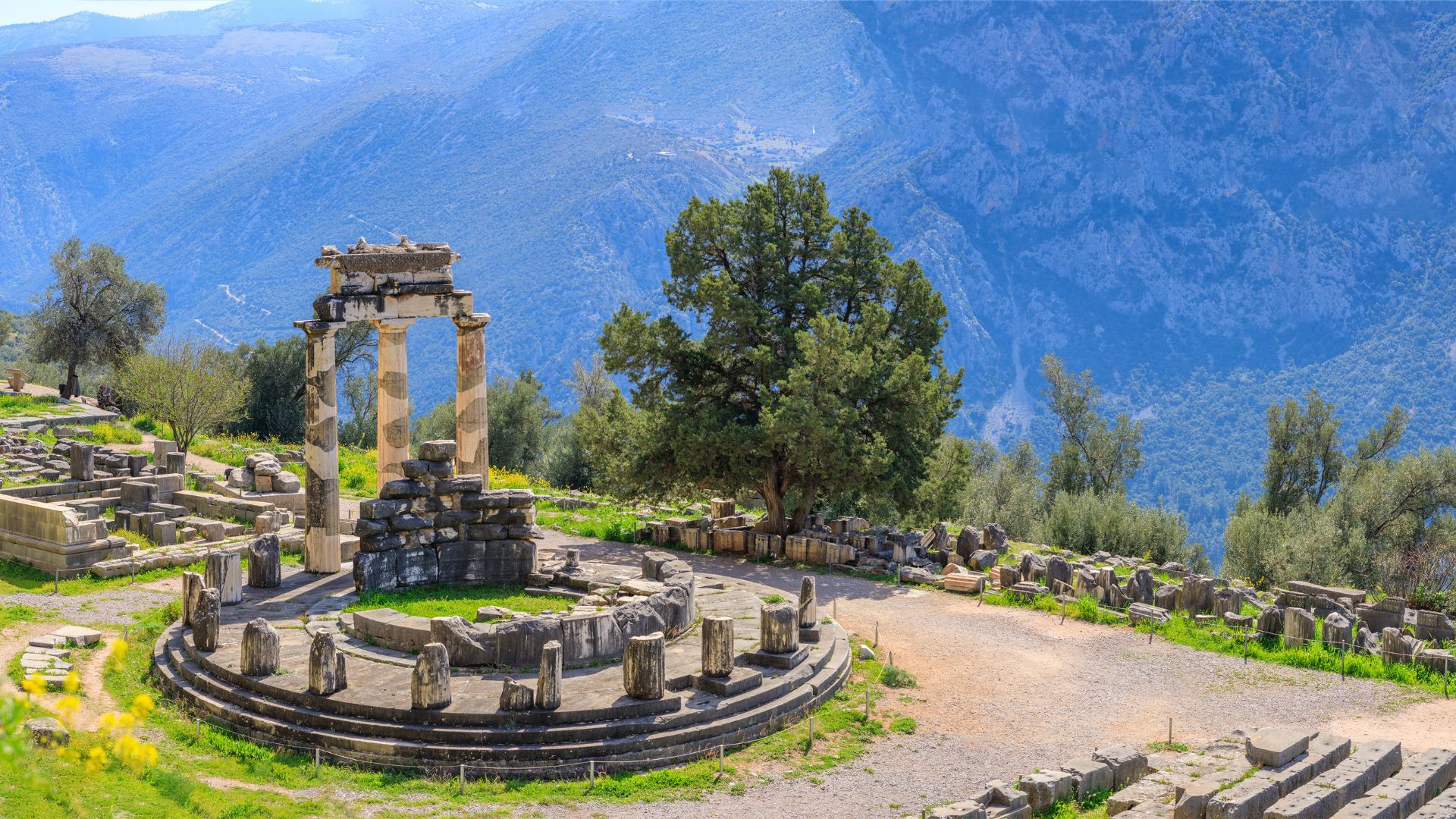 Anyone who knows Delphi well enough will have been repeatedly enchanted by some other fringes of light, those that often line the view as far as the Cressian gulf. A veritable flood of associations spanning 2,500 years of history, is so enthusiastic that it ties in seamlessly with the stories about the Pythia in an "enchanted" state and, before her, the fortune-teller Sibyl. The village was there until 1892 when French archaeologists were permitted to begin excavations. The last house to be demolished was that of a grandmother who stubbornly refused to leave and whose foundations Heniochos finally found.

The base of the Naxian Sphinx is empty. We will meet the famous Sphinx, as well as Heniochos, later in the museum. This journey has no end. You can study Delphi for a lifetime or just enjoy its inexhaustible natural and architectural beauty by listening to the first spring nightingales and drinking some water from the Castilian spring.

You can also follow ancient routes, such as part of the flower-strewn path of Delphi - Kirras, and then an hour's walk from Delphi to Chryssos. Whatever stone you step on, it hides millennia of history underneath. Some archaeologists claim to know exactly where in Eleonas the hippodrome was, for example. The quiet, ancient and well-maintained village of Chryssos today is very different from the touristic and partially decayed settlement of Delphi. And the path, if one continues to walk it, is wonderful in Eleonas of Amfissa.

A city modern and at the same time old, the capital of the Municipality of Delphi is only 15 minutes from Chryssos and less than half an hour from Delphi. Bright inscriptions between wooden retro signs make up the "showcase" of modern Amfissa. Modern cafes, on the one hand, and historical, old cafes on the other, such as "Gyali Kafene".

Day three | in the mountain and primordial springs

Morning awakening in Itea and coffee on its sandy beach and after an hour's drive arrive at the snowy -for a little while longer- Parnassos. The sun, the thin air at 2,250 m, the few fanatics and happy skiers skillfully maneuvering and, on the horizon, several whiter peaks make up a different, sense of the inexhaustible Municipality of Delphi.

The tour continues through the wonderful fir-covered route to Agoriani, stops at its waterfall, leaves for another tsipouraki, as the air and the modern culture of the mountain dictate, and ends at the revelation of the springs of Kifissos, in Agia Eleusa. Their purring, the wetlands around them, the light green of the season on the mountain slopes of Parnassos, and the always good company of obsessive travelers have erased any sense of everyday life. A center of reference since ancient times, the springs of Kifissos are connected throughout time with the port of Kirra and almost every stop of this journey. In fact, according to the legend, Kifissos feeds with its life-giving water the daughters of Castalia in Delphi and Lilaia, today's Kato Agoriani.

End up with another wine tasting, honoring ancient Greek customs, in the always welcoming courtyard of the Argiriou guesthouse in Polydrosos, tasting his new label Manteio, but also experiments of his friends, such as the wine cellar. The family's winery is the only one in all of Parnassos and has set out to revive old varieties of the area, as well as to acclimatize foreign ones to the slopes of the mountain. Can you imagine a better ending to such an escape? Under the influence and euphoria of the wine, instead of a poem by Seferis coming to mind (as would be expected in Delphi), that of Elytis comes to mind: "Beautiful and strange homeland".