You get them walking like an infantry soldier from archaeological sites to “must see” places and countless museum halls. Places they don’t understand or simply don’t consider “cool”. So at some point your kid’s patience might run out and the nagging is inevitably going to start. To make your life a lot easier we gathered a handful of ideas, for things you can put in your visit and sightseeing program to avoid underage mutinies during your vacations. 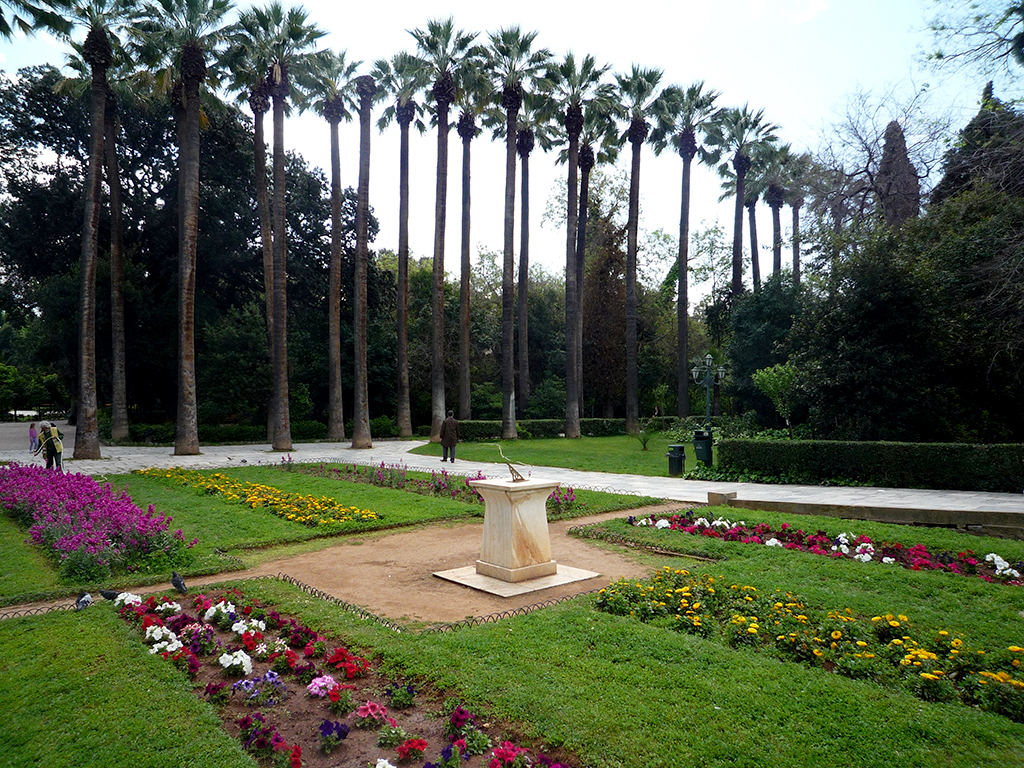 They are smaller than the metropolitan parks you may find in big European capitals or NY’s Central park, but they are more of a tropical place and, thanks to the complex path layout, a walk can last much longer than you expect. Initially built as an exclusive garden for the royal family of Greece, it offers a wonderful oasis of serene green pathways between tall trees and thick bushes, flowers and beautifully crafted metal sheds, even some statues, right in the middle of the city’s center and next to the parliament, on its southeast side. There are peaceful ponds where ducks and fish co-exist, a beautiful small café and several playgrounds. Also, don’t be surprised if during your stroll you have chance meetings with turtles, goats, donkeys or some of the countless stray cats that enjoy the thick shade.

Most importantly it offers places to run, scream, hide and play with dirt and water at walking distance from some of the biggest museums and the Acropolis.

Check for more information about the National Gardens here. 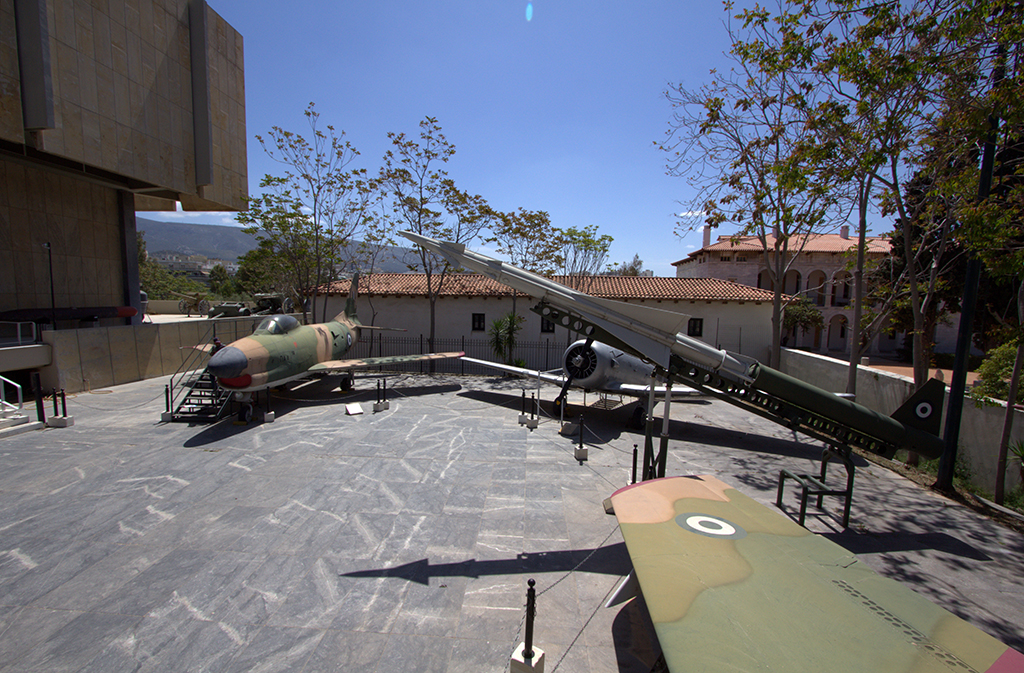 Even if they are too young to fully understand history and its wars, the Athens War museum offers kids all things “cool”, especially for little boys. Shaped like a pillbox from a Star Wars movie, with planes and rockets parked outside and a stone’s throw from the Byzantine, Cycladic Art and Benaki Museums, it is ideal for bored little boys and their fathers. The collection features all kinds of weaponry, uniforms and other war history-related exhibits. And we do mean ‘all kinds’! From original Japanese ages-old katanas, complete samurai sets of armor, and medieval knights’ accessories and weapons, to bazookas and flame throwers; reproductions of ancient Macedonian weaponry, with which Alexander the Great conquered all the then-known world, ballistae and other siege weapons, even the “siphons” that the Byzantines used to pour “liquid fire” on the enemy.

Tip: everything exhibited on the outside - jet planes, cannons, torpedoes, flak guns, radars etc. is pretty much ok for the kids to touch - but not to demolish. Oh, and if you look carefully at the ceiling, you can see one of the country’s first, 19th century, biplanes hanging from the ceiling like a plastic model. 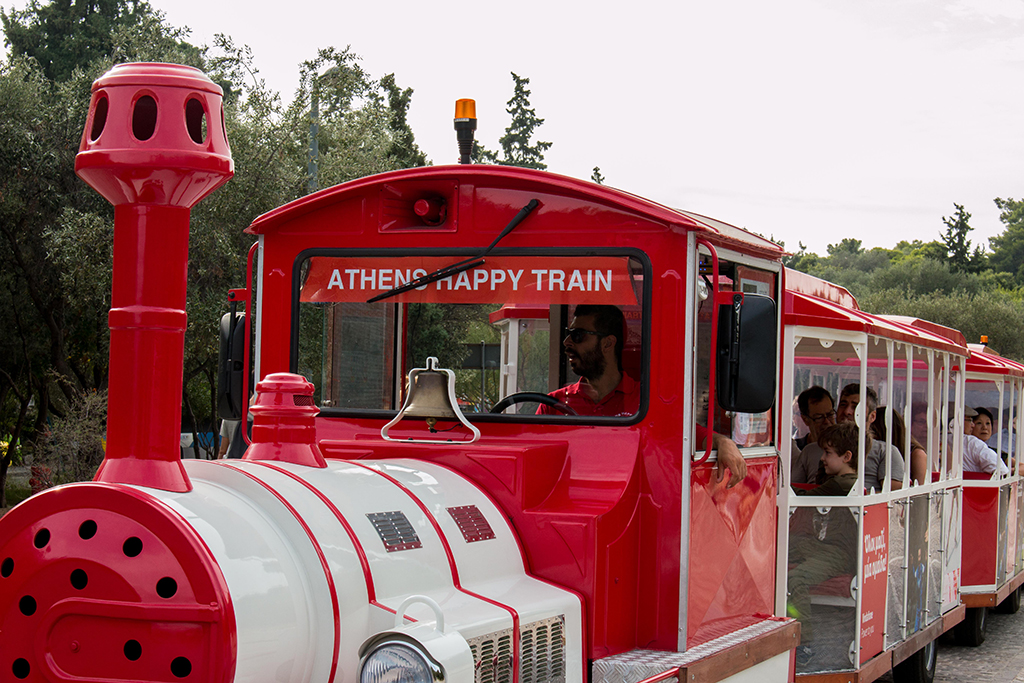 One of the reasons for nagging during sightseeing is sore feet. To save some miles of walking on those little feet and at the same time see most of the city’s life and sights, simply take the kids’ favorite transportation, one of the many brightly-colored small street trains. All of the small, toy-like trains take a long sightseeing tour of the historical center of Athens and the most famous ancient sites and monuments; you can hop off, in order to spend more time at any given place you choose, and catch the next one at no extra cost. They are covered and have guard rails on the sides, so they are safe and cooler than the street, but you can still hear and smell the city, apart from seeing it. A host is present on board and commentary is available in English and Greek; there are stops at most of the main tourist sites, for around 15 minutes, and they depart at 30-minute intervals so the route timetable is convenient enough for most visitors. A typical tour starts at Syntagma Square and follows a route through the historical center of the city, the old neighborhoods, the hill of Acropolis, Plaka area, Temple of Zeus, Thission, Monastiraki Square, Ancient and Roman Market, Zappeion, Panathinaiko Stadium, Theater of Herodes Atticus, Hadrian's Arch and the New Acropolis Museum.

For More Information you can visit happy trains website here. 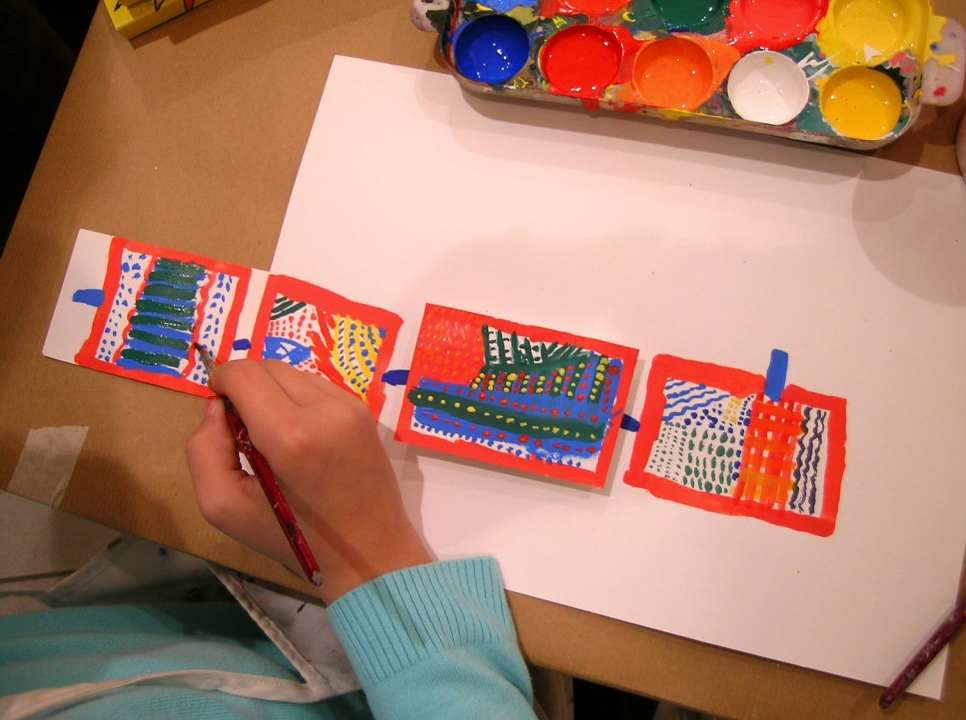 Take the kids to a museum where their own art is the centerpiece. The Museum of Greek Children's Art, in Plaka, is focused on art created by children.  You can see drawings and three-dimensional artwork created by young artists between 4 and 14 years of age. The collections include 7.000 works - entries to various art contests which are held regularly - and also creations from the workshops. Its exhibition themes focus on education through art. Current exhibitions aim to familiarize children with their rights as they are mentioned at the Convention on Children's Rights. In addition, they aim to create awareness about the work of famous painters while also getting acquainted with various materials and techniques. Plus, the interactive section of each, exhibition offers the possibility to enjoy games, fairytales and books, helping the kids approach the exhibits in a more stimulating way.

If you happen to be near the south shore of Athens you can also visit the Benaki Toy Museum, on 14 Poseidonos Avenue, in Palaio Faliro area. It is brand new and opened to the public in 2017. Its exhibits, based on the collection of Maria Argyriadi  (among the most significant of its kind in Europe), include toys, books, ephemera, clothing and other items associated with childhood from Europe, Africa, Asia and the Americas. Surprise your kids with a tour about what kids from other eras or parts of the world played with. At least they will re-evaluate even the oldest of their game consoles. Hint: if the visit doesn’t have the success you expected you can take them across the main road and, there by the seaside, visit the playground at Floisvos Park, one of the largest in the area.

Be an ancient Athenian 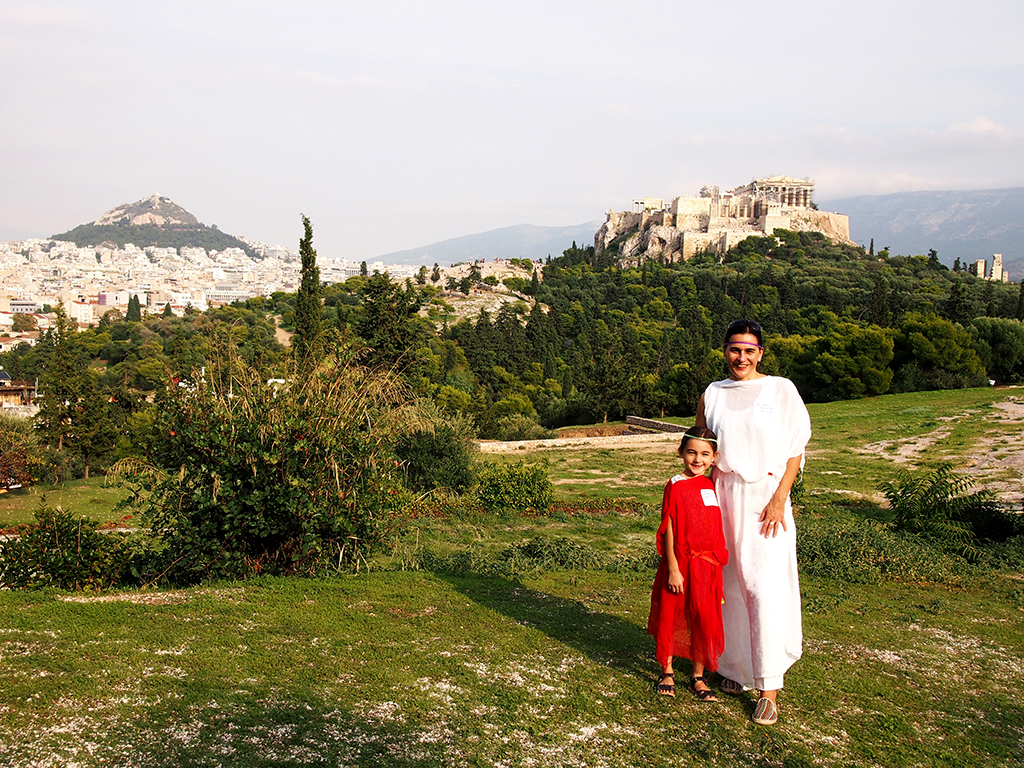 In the company of an expert in educational games for children, your experience will start with a short walk passing by some of the major sites of Athens, on your way to the starting point of the game.
The activity is a revival by the family of the ”Ecclesia” (Popular Assembly) that was responsible in Ancient times to vote on law proposals and elect certain magistrates. Through this experiential activity you will learn about the Golden Age of Pericles, the evolution of democracy and all about the everyday life of Athenian citizens who lived in the greatest city of the ancient Greek world.
The experience is multidimensional as it also includes theatrical and learning games, riddle solving, storytelling and creative art & crafts activities.
An entertaining and educational activity for families with children that are looking for a fun way to learn the history of Classical times and to discover how one of the most famous and beautiful cities of the ancient times was born. 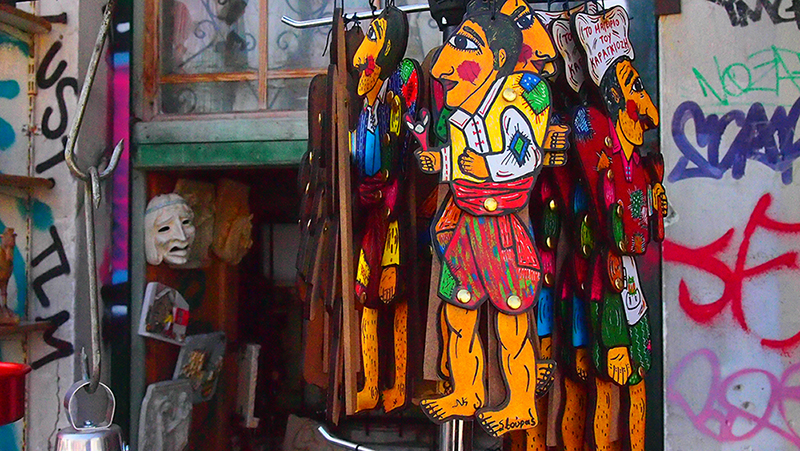 Despite the fact that English subtitles are not an option, the Karagiozis shadow theater can be a nice surprise for a child of the digital age. Performed with the projected shadows of cut-out cartoon figures which are hand-held against a white sheet, its magic is based on the sound and motion created by the artist-puppeteer. Its simplicity makes it ideal for younger kids but also for parents who would enjoy it as a rare form of folk art still surviving today. Tasos Konsta’s Show in Tripodon 30 at Plaka is right in the middle of most of the sightseeing routes and, very conveniently, starts around 11.00 am every Sunday; but, if the time is not convenient you can always look for one of the many other Karagiozis shows around town.

For More Information check our article: “Shadow Theater” in Athens

The Evzones Guard of the Unknown Soldier’s Tomb 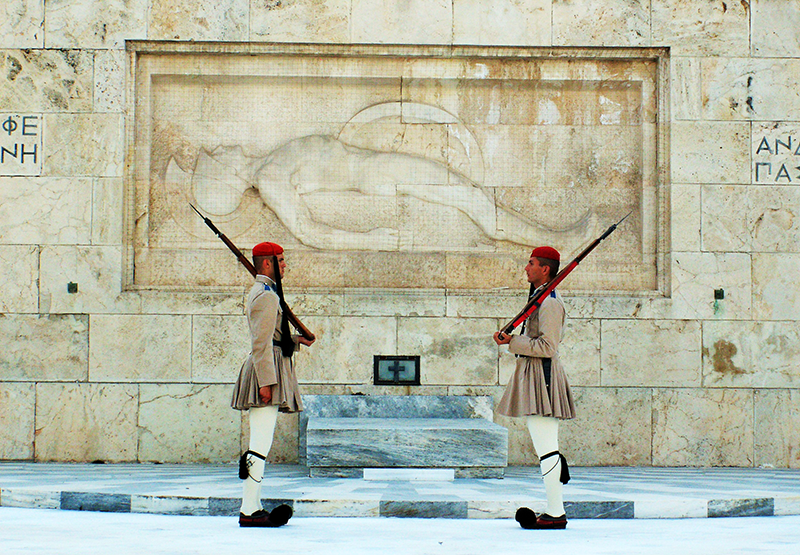 “Hey kid do you want to see funny soldiers with rifles, skirts and mustaches, standing still like statues?” For some reason, which may escape almost every grown-up, they always do. And the funniest of things is that the show is on every hour, right in front of the Greek Parliament and in close vicinity to where you most probably already are, sightseeing. So, the Evzones (meaning “well belted”) is a traditionally-dressed honorary corps of the Greek Presidential Guard. They are handpicked among the male Greeks during their service time in the Greek army, for their stature and strength, and wear this traditional and funny attire that originates from the Greek revolution. That means they wear big pom-poms (the “fountes”) on the tip of their shoes (named “tsarouchia”), red caps (fezes) with long tassels, white skirts (the “foustanela”) and tights. They are dressed like the original Evzones –an elite force of tough guys from mountain regions guarding the northern borders- and like the Grenadier Guards in London, the guards in Athens maintain fixed stares and stand as still as statues, even when tear gas or Molotov bombs start flying in the Syntagma Square, they leave their post only when ordered to do so. People are allowed to pose next to them to take photographs, but if you get too close the guard will stamp his foot, a signal to the by-standing officer to come over and berate you. The changing of the guards takes place every hour on the hour and is a kind of ritual that involves a series of symbolic movements which the kids find interesting, to say the least. 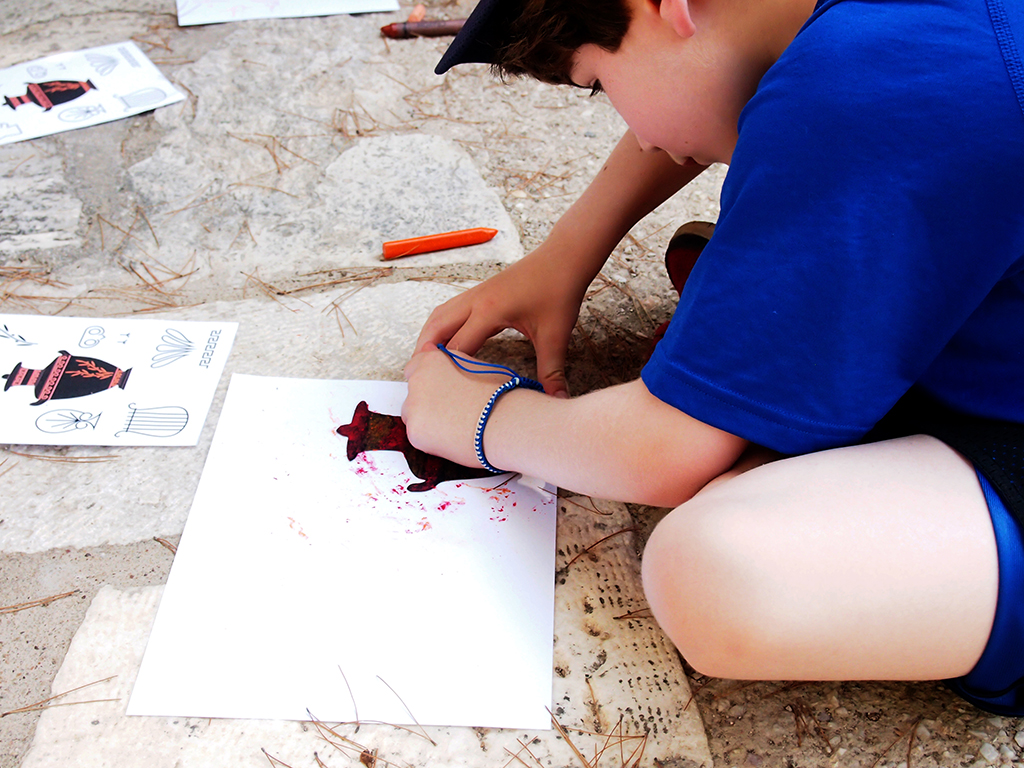 You will get to Pnyx Hill with our specialized Insider painter, so that you have a clear view of the Parthenon. Then, after a short workshop on drawing and painting techniques, you will let your imagination and creativity thrive!
Learn about the combination of colors, how to create perspective in your drawings and admire the architectural masterpiece of the Parthenon. We will provide you with a canvas and all the required material for an unforgettable day, that will let you create your own souvenir to take back home with you.