There is a side of the island unknown to most. This fall, when the crowds leave, we will have a prime opportunity to explore it.

Just one hour from Piraeus by ferry, Aegina is an ideal destination for Athenians during summer weekends. But in September, as soon as the now popular Pistachio Festival (September 15 – 18) is over it changes. The crowds leave, most hotels and beach bars close, and significantly fewer visitors now have the opportunity to explore it in peace. The weather also helps, as it cools down, but it rarely rains before mid-November. On one side of the island, the scent of pine dominates, while on the other, sage – aromas that will accompany your carefree afternoon walks in the best way. After all, this is the Aegina that the locals enjoy in its villages – in Antiseo, Sfentouri, Portes, Mesagros –, but also the (many) sheep that graze in its fields. 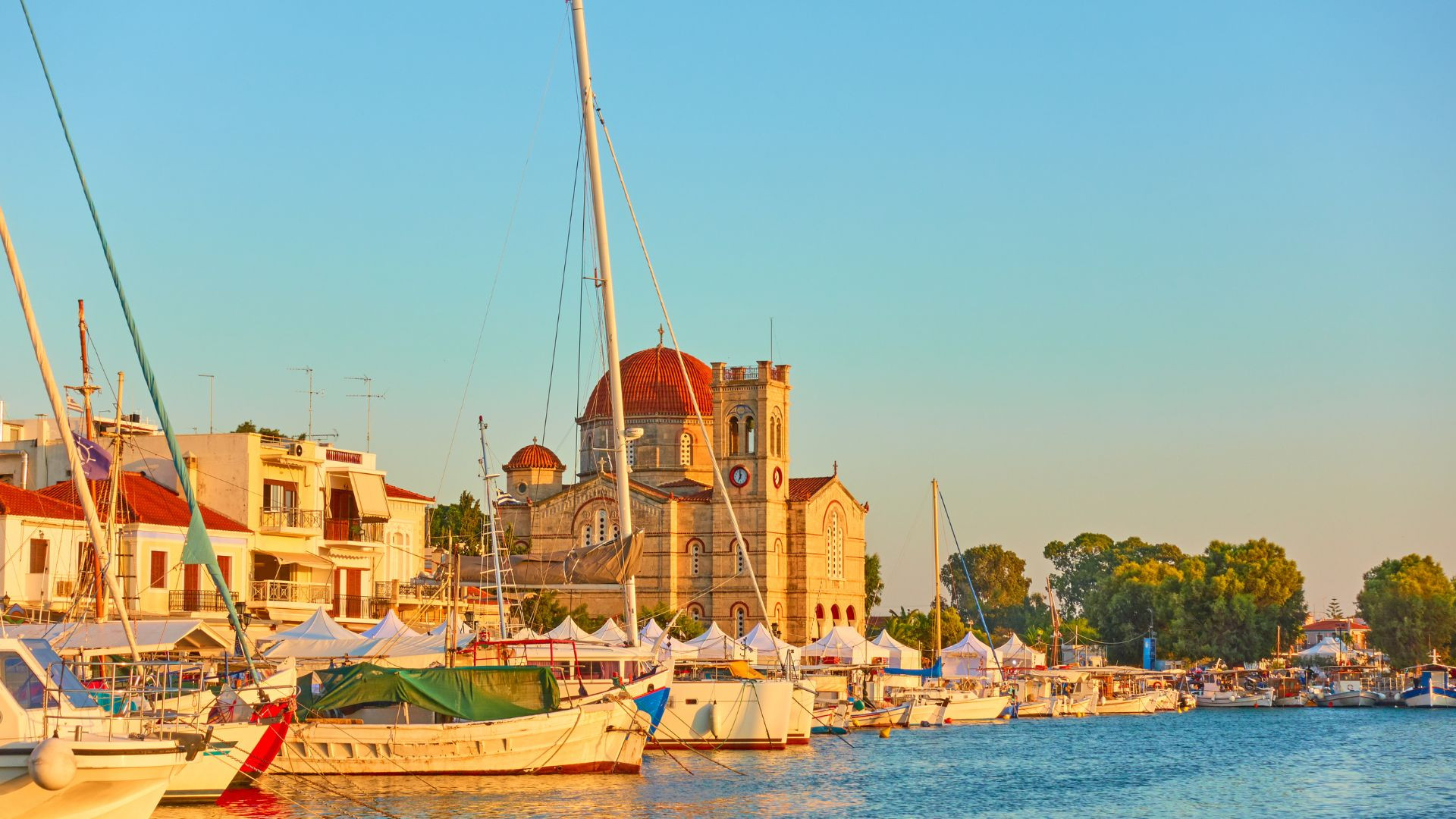 Sunrise at the Hellanion Mountain

Set the alarm for five in the morning – it's worth it. The journey from the city of Aegina to the western side of Mount Hellanios takes about half an hour by car. It won't be dawn yet. Flashlight in hand locate the uphill trail E1, which is in good condition and adequately marked, and start climbing it. Half an hour later you will reach the church of Analipsi and Prophet Ilias, having already conquered the top. Be sure to bring the essentials for a light picnic: a hot drink and a handful of pistachios – you are in Aegina after all! As the sun rises, the panoramic view reveals the island as a whole and the Saronic Gulf as a giant lake, embraced by the shores of Attica, Corinth, and Argolis. See how many islands you can make out in the background: Salamina, Metopi, Agistri, Moni, Poros, Patroklos, and the list keeps going…

According to the legend, Aeacus, king of Aegina and son of the Greek Zeus, arrived here to ask for help from his father, as the island had been hit by a severe drought. Zeus sent rain. To this day, when the top of the mountain is covered with clouds, the residents believe that it will rain. On the way back it is worth a short stop at the Chapel of the Taxiarch, which is built on the ruins of an ancient temple dedicated to Zeus, the rain god.

Once upon a time, the fields of Aegina were rich in local varieties of lentils, beans, garlic, and almonds. However, in continuation of the above myth with Aeacus and Zeus, no one knows how they found water to irrigate all these crops. In modern times, however, with the minimal rains, one tree that has managed to thrive is the pistachio (120,000 pistachio trees are grown on the island), but also its fruit, the small and very aromatic Aegina pistachio, which is a PDO product. This year's pistachios have just been roasted and we recommend that you get them either from "Kypseli" or from the "Agricultural Cooperative of Pistachio Producers of Aegina" or from "Mourtzis Traditional Sweets” where you will also find delicious pastries.

In the southernmost village of Aegina, Sfentouri, Yiannis Cherouveim, and Evangelia Tzitzi maintain the farm and cheese factory "Oreini Aegina". Starting their day before sunrise, their 180 sheep and goats graze in areas of the island that few locals know about. Come here in the morning hours to see how their spicy gruyere, halloumi, and excellent yogurt are made, as well as their rice pudding, milk pie, creams, and ice cream. 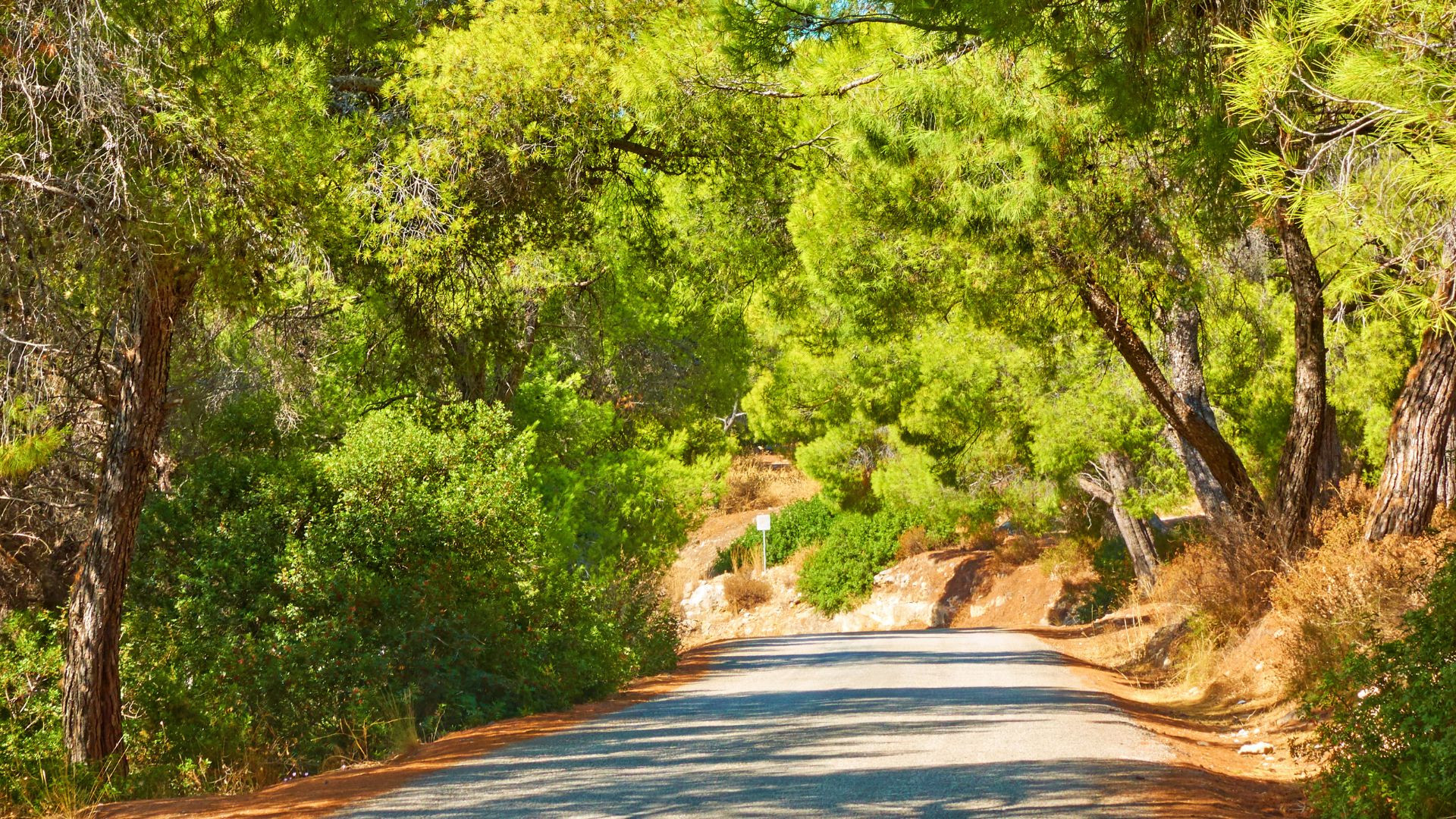 The beginning of the route finds you on a beautiful cobbled stone pavement. The grasshoppers, which abound in the field, create the characteristic "musical" background that will accompany your steps as you enjoy the view of the Saronic Gulf, with the islet of Moni in the background. Look for the trail markings (E2), so you don't lose your way, as many animal crossings can confuse you. But there are also elements of human intervention, such as large cisterns for collecting rainwater and watering the animals that graze around.

Ancient Olive Groves, with trees 1,500-2,000 years old and a mythical atmosphere, is a favorite place for locals for a Sunday picnic. In total, from Sfentouri to Ancient Olive Grove you will walk 45 minutes (allow an hour and a half for the return from the same route, as it is uphill).

Autumn is the season when you will prefer the family taverns of the hinterland to the beach restaurants of the island. At "Argyri" almost everything served, including the wine, is homemade or local. You will dip your bread into the stewed veal tongue sauce, and you will enjoy the village spinach pie, while the lamb – cooked in the oven on Saturdays and in the oven on the rest of the days – literally melts in your mouth. Equally, delicious food is served at "Sofia" and "Vatzoulias".

On the southwest side of the island, two peninsulas seem to "target" the islet of Moni opposite, like the open mouth of a hungry fish. Here is the small fishing village called Perdika, reminiscent of the Cyclades and gathering visitors both in summer and on autumn weekends. Stroll through its narrow streets and reach the tip of the southern peninsula, where you will find an impressive 360° camera obscura in a circular building.

Then sit down in one of Perdika's fish taverns in front of the sea and taste mullet at its best. Squids, octopuses, anchovies, shrimps, and prawns – all from the wider sea area of ​​Aegina – perfectly complement the menu of the season.

Antiques and rarities – or, to be more precise, anything old and handmade with an interesting story to tell – are the focus of Sara Koutroumanou, who markets all her acquisitions from Greece and Anatolia at “Svarna”, the specialty store that she maintains in the city center. Here you will find everything from old Iznik pottery and embroidered cotton kaftans from Istanbul to traditional bridal jewelry from northern Greece. On the ground floor, which also serves as a musician's rehearsal studio, painting workshop, and exhibition, you will find many fabrics, beautiful tiles, and unique furniture.

Until the end of the 18th century, the main settlement of the island was in Paleochora, known today as "Mystras of Aegina". Sited in a valley in the heart of the hinterland, it consisted of amphitheatrically built houses on a hill crowned by a fortress to avoid pirate raids. The houses were progressively abandoned and collapsed. Today, all that survives in the old capital of Aegina is a total of 38 churches. Come for an afternoon stroll, but… watch out for snakes.

Saying goodbye to summer, as the night chill gradually increases, the evening entertainment on the island does not have a sea view. At the wine bar "Tortuga Artcafè" you will find more than 100 wine labels from both Greek and foreign vineyards. At "Avli" you will mingle with locals of all ages and at "Perdikiotika" you will have your drink in the same wonderful preserved building where Ioannis Kapodistrias received his guests at the receptions he organized as governor of Greece and which later housed the first bank of Greece.

The first thing one sees upon arriving in Aegina is the Temple of Apollo. A marble column that stands alone on a hill above the port. This is the last remnant of a temple dedicated to Apollo (520 BC). It is worth a walk to the excavation site - where the oldest findings date back to 3000 BC -, but also to the Archaeological Museum of Aegina.

On the other side of the island, surrounded by pine trees and overlooking the sea, the Doric temple of Aphaea (500-490 BC) dominates the hill above Agia Marina. It is the most important monument that survives today from the sanctuary of the local goddess Aphaia, who is also mentioned by Pausanias.